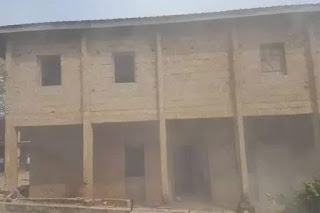 Kogi State Governor, Yahaya Bello on Wednesday stormed some property in Okene Local Government Area of the state belonging to suspected members of the Boko Haram sect.
Bello, who was accompanied by the State Police Commissioner, Wilson Inalegwu and heads of other security agencies, brought down a mosque used by suspected kidnappers, Boko Haram terrorists and armed robbers in Okene, in the Central Senatorial District of the

The two buildings destroyed by the officers belonged to a suspected kidnap kingpin, popularly known as Alhaji Tijani Bakare in Oyunkoko Ward in Okene, while the second building levelled to the ground was the Ahlul-Sunnah Mosque in Inike, Okene LGA, which was reportedly hijacked in 2015 by members of the Boko Haram sect.
Speaking shortly after the exercise, the Governor said he had no sympathy for anyone engaging in dubious acts, as he would implement to the letter the law against anti-kidnapping, robbery and terrorism.
He said, “For those who are in the habit of harbouring criminals in their houses, we will fish them out and mete out serious punishment to them as if they are criminals themselves.‎”
The governor warned that more property of criminals would be demolished.
Kogi State Police Commissioner, Mr Wilson Inalegwu, said it would no longer be business as usual for criminal elements operating in any part of the state.
FOR PROMOTION PURPOSES ON Gistsnaija.com.ng PLATFORM CONTACT OTUTU GAIUS OR CALL +234(0)8141671219 OR VIA EMAIL – Gaius.Godwin.og@Gmail.Com
Post Views: 32
Click to see more posts about 👇