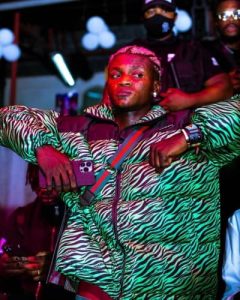 This time, he is dragging the international show promoter for denying and rebuking him on his IG live with Zlatan.

Zlatan and Kogbagidi went live on IG on their way to Davido’s show. It was going smoothly until Zlatan decided to hype Kogbagidi using Portable’s name.  He said: “This is Zazu’s manager”

Immediately Kogbagidi said he is not Portable’s manager. In his own words: “I rebuke it, I reject it”.

Reacting to the public denial, Portable took to his IG account to drag Kogbagidi for the second time. He said the god of thunder (Ogun) will visit Kogbagidi for denying him after he has used him to cash out.

According to Portable, he is not surprised by his ex-manager’s words towards him. To him, Kogbagidi wasn’t really a manager, but a hungry ripper.

He recounted how he helped Kogbagidi countless of time, how he bought fuel in his Benz and even helped Kogbagidi live his fake life. He once again warned Kogbagidi to be careful and he should try to avoid him and his business henceforth.

Watch the video below: